To view Part One of the Victorian Paint Colors post, click HERE.
In a previous post I described my process for selecting historic paint colors for 19th century homes and businesses.  Rather than relying on so-called “Victorian” color collections from modern paint manufacturers such as Behr or Sherwin-Williams, I use period color swatches.  This way I can be sure to consider the same colors homeowners did 130 years ago and offer my customers a truly authentic color palette.  In addition I also study the way house paints were mixed and tinted to understand better how the original colors appeared

What is the process for selecting colors palettes for older homes?  First, I read what designers and architects wrote about house colors and fashion in the 19th century.  Andrew Jackson Downing, Samuel Sloan and many others wrote in detail about selecting paint colors and how they thought a paint scheme should be arranged.  By working my way through these primary sources I can get a good idea how Victorian homeowners and designers picked their color palettes.

Second, I need to know how paint was mixed.  When I read Downing's descriptions of paint colors such as drab or fawn it is essential to know which pigments were used so I can imagine how the paint might have looked.  Also, since painters tended to be a conservative lot who mixed paints using familiar recipes,  I can look at later color swatches to get some idea of older paint colors.  Learning about these paint recipes and pigments is a reliable way to reconstruct an early color palette.

19th century paint was mixed using four basic ingredients: linseed oil; white lead; turpentine and pigments.  Many of the pigments used before 1875 were earth pigments, or pigments mined or refined  from soil.  In other words, earth pigments are pretty colored dirt.
Here are a few examples of pigments that were commonly used in the 19th century. 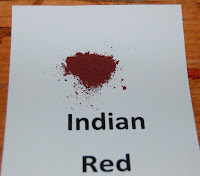 Indian Red is ferric oxide that was originally mined on the Indian Subcontinent (thus its name).  Other deposits of ferric oxide have been discovered all over the world and several have names, including English Red or Venetian Red, that indicate the place of their origin.  Since this pigment was relatively cheap, barns and industrial buildings were frequently painted with paint containing Indian Red. 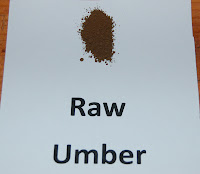 Raw Umber is also named after its place of origin: Umbria, Italy.  It is a medium brown pigment refined from clay containing ferric oxide and manganese.  Raw Umber was widely used in the 19th century.

Pigments could be baked in ovens to drive out water and cause them to darken.  Compare this Burnt Umber sample to the Raw Umber sample above. 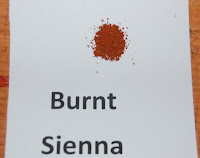 Burnt Sienna is a limonate clay containing ferric oxide that was originally mined around the city of Sienna in Tuscany, Italy.

Other pigments, such as Prussian Blue and Chrome Green, were commonly used.  Unlike earth pigments, these pigments were produced in factories.  Although found in many paint recipes, several of these manufactured pigments were fugitive, meaning they tended to fade or discolor in sunlight.  This is why few 19th century houses were painted bright blue or purple since these paint recipes usually contained fugitive Prussian Blue.

Earth pigments proved to be durable and were widely used until the 1870s when they began to be replaced by brighter, more vibrant colors made from the by-products of the  petroleum industry.   This is why the bright, saturated colors commonly used in the early 1900s on Queen Anne homes look out of place on earlier Italianate and Gothic Revival examples.