An Interesting Artifact for the Fan of Historic Homes

An important ritual for many American men during the 19th century was a weekly trip to the barber shop for a shave. The barbershop was a social hub in large cities and small towns alike as men congregated to gossip, do business, read the paper and get a professional shave. The shave was a multi-step process where barbers softened the beard with hot, moist towels and conditioned the skin with scented oils. They then used a porcelain shaving mug, badger hair brush and scented soap to create the lubricating lather needed for a close shave with a straight razor.

Plain porcelain shaving mugs are quite common today (after all, every man had one) and aren't particularly interesting. However, there is one, less common type of shaving mug that is quite interesting and offers a glimpse into the life of a tradesman in the 19th century.

The discovery of Germ Theory by Louis Pasteur in the 1860s led to the creation of sanitation laws that required a barber's clients to have their own shaving mugs which could not be shared with other patrons.  Blank shaving mugs were imported from France and Germany and personalized by painting the man's name in elegant, fraktur calligraphy.  Sometimes a scene was also painted on the mug which depicted the man's profession or trade.  These occupational shaving mugs were displayed in the barber shop and served as a type of advertising.  When someone went looking for a painter, carpenter or lawyer, they could stop by the barbershop and check out the shaving mugs to find the professional they needed. 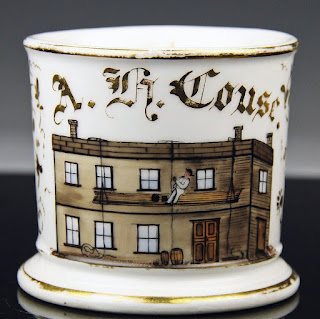 Pictured is a example of an occupational shaving mug for house painter.  Although detail is lacking, we can see wooden barrels which would contain linseed oil and white lead.  The painter is standing on a scaffold which appears to be supported by ropes and pulleys.   At his feet is a pail of paint. The other object is likely another pail which might hold his brushes or other things such as rags or a pumice stone for smoothing rough wood.  Interesting for the historian and colorist is the entrance door.  We can see that the door's rails and stiles are painted a lighter brown and the panels another, darker brown.
Posted by Historic Design Consulting LLC. at 12:33 PM No comments: Links to this post