I am occasionally asked how molding such as window casing or base was produced during the 19th century. The answer depends on when and where.  By the middle of the 19th century steam and water powered mills were producing most millwork, including casing, base, cornices, spindles, doors and windows. However, in some remote regions people continued to rely on carpenters and house joiners to make molding by hand using a variety of hand planes. By the end of the century factory produced millwork had become the norm, as railroads made quick and inexpensive transportation possible to most parts of the country.

In the following photos I will demonstrate how I made one part of a molding profile on a piece of sample window casing using 19th century hand planes. I am using a scrap piece of basswood approximately 4 inches wide and am working in the wood shop at The Landing, a living history museum located in Shakopee, MN.

I began by adding beads along both edges of the casing using snipe's bills and a #2 round (a side bead plane would work just as well). For the next step I will add a  shallow, rounded groove down the middle of the casing.  To start I lay out a small groove which will serve as a guide for a molding plane.   Here I am using an adjustable plow plane with a movable fence and depth stop which allow me to place a groove of any depth anywhere on the face of the stock. 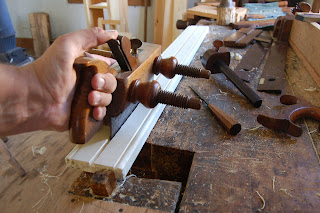 Once I have struck the groove into the middle of the board I will use a rabbet plane to chamfer both of the groove's edges.  The chamfers will provide a good surface for the next molding plane, a #5 round, to ride upon. 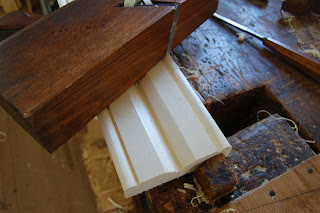 The chamfers guide the #5 round along the length of the casing.  I plane the entire length until the groove from the plow plane has disappeared and I have one, full-width shaving. 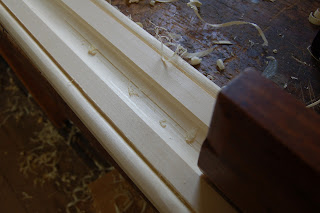 After a bit of refining and smoothing you are done.  You can continue and use other planes to add more complexity to the molding, including hollows to round off the sharp corners. 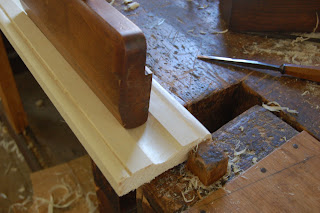